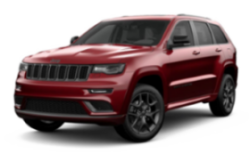 We imagine designing a Jeep is a bit of a tricky task. Rolling out a progressive design while also appeasing Jeep fans with styling cues such as the seven-slot grille, trapezoidal wheel arches and other parts of the Jeep lineage is probably pretty challenging, but as the recently introduced Jeep Compass shows, the design team over at Fiat Chrysler knows what they’re doing.

Jeep’s design team is headed by the automaker’s global design lead, Ralph Gilles. A Montreal native, Gilles has been with FCA since the early 1990s and has held numerous design leadership roles within the company. He was appointed senior vice president of FCA design in North America in 2009 and was later promoted to CEO of its SRT and motorsports divisions. In 2015, he was named the automaker’s global head of design.

Gilles was recently interviewed by automotive design site Form Trends, which gave him the chance to talk about the past, present and future of Jeep design. Gilles talked with the sit about Wrangler and Renegade styling, Jeep’s ‘Easter Egg’ design cues and the automaker’s seven-slot grille, among much more.

Hear what Gilles had to say by watching the video interview embedded above.